Sarosh Patel and Lawrence Hmurcik | Electrical Construction and Maintenance | June 19th, 2015
When a four-man crew took on the installation of two non-electric advertising signs for an automobile repair shop, the threat of electrical hazards seemed virtually nonexistent. Ironically, though, it was electricity that ultimately turned the day into a tragedy — only two workers walked away from the job unscathed, a third suffered serious injuries, and a fourth lost his life.

During the process of putting up two non-electric advertising signs that were approximately 30 ft long, 4 ft wide, and positioned approximately 15 ft above ground, the crew bolted the first sign in place piece by piece without incident. Bolting the second sign in place in the same fashion, the workers installed it on the side of the building near a 13kV utility line that serviced businesses in the neighborhood. 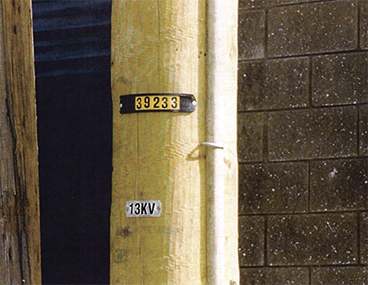 Because the elevated position of the signs, the workers used a 1975 Ford bucket truck with a boom attached. One man (on the ground) operated the boom in which another was standing. He called out instructions to his partner to make sign adjustments here and there before advising him to securely bolt it into the building’s concrete/cinder block wall. A third man was positioned on the roof on which the sign was being mounted. His job was to feed the installer pieces of the sign as well as bolts, hardware, and tools. These three men were employees of a fourth man, who was the only licensed professional sign hanger in the group. Although this man was present when the work began, he left the job site several times and returned periodically to check on the crew’s progress. However, he was not there at the time of the accident. 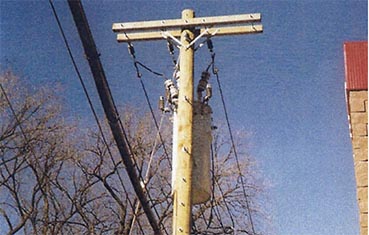 The crew performed this installation near a 3-phase, 13kV electrical distribution line supported by a wood pole (Photo 1 and Photo 2). This job was nearly complete — only one piece (approximately 1 ft sq) remained to be set, when suddenly, out of nowhere, a bolt of electricity from the nearby electric line arced over and electrocuted the man in the bucket. Immediately rushing to his aid, the second victim (coworker on the roof) was also shocked and later hospitalized but managed to survive.

A True Shock to the System

The Case of the Hurried Electrician

The Case of the Electrified Railing

The Case of the Energized Cable Cutting Incident

The first victim (man in bucket) was pronounced dead at the scene by paramedics. Unfortunately, there was a long gap in response time (up to 20 min.) because they had to contact the utility to turn off the power. Paramedics administered first aid to the second victim upon arrival (approximately 10 minutes after the accident). He had bent over the 3-ft-high wall surrounding the flat roof (Photo 3) in order to pull his friend out of the bucket to safety, and somehow managed to let go and fall backward on the roof during this process. Upon medical evaluation, he reported unusual pain where his stomach had touched the aluminum capping on the wall. He was hospitalized with second degree burns and damage to his nerves and internal organs. 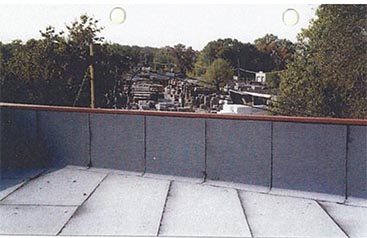 Both victims’ families sued for damages incurred in this accident. Serving as the plaintiff in a joint case, they sued the owner of the building where the incident occurred for providing an unsafe working environment as well as the person renting the building for the same reason. They also sued the utility for not providing sufficient warning about the dangers of working near energized power lines and the licensed owner of the sign hanger business.

We were hired by the insurance company representing the landlord and tenant of the building. First, we checked whether the power lines were located too close to the building in question. The law of the city in which these accidents occurred dictated a certain minimum clearance between a current-carrying conductor and buildings, depending on the voltage of the conductor. In this case, that was 8 ft, 10 in. ANSI guidelines for the minimum distance in this case was 10 ft; the same distance is cited in (OSHA references 29CFR 1910.333(c) (3) and 29CFR 1926.550 (a)(15) and Handbook of Electrical Safety in the Workplace).

Next, we determined that the victim was riding in an electrically uninsulated bucket, which was stationed less than 7 ft from the 13kV line conductors (3-phase). Ultimately, the truck served as an electrical path to ground. The truck was supported by metal outriggers that were separated from the roadway by wood planking. Because the victim was working too close to the live wire, once an electric current arced over to his bucket, a sufficient amount of current flowed through him, the boom truck body, outriggers, and wood blocks to ground. Proof that the outrigger, which sat on a wood block, conducted electricity was evidenced by the presence of a burn pattern beneath its location on the ground (Photo 4). 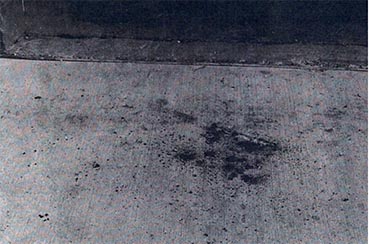 It should be noted that the electrical arc was never seen by any of the workers, nor were any of them wearing personal protective gear (it seemed unnecessary to the licensed boss). It should also be mentioned that the last part of the sign was actually placed farther away from the power lines than the previously installed portions of the sign. Clearly, the victim was well within the “danger zone” for all of the work he did on the second sign. So why did this accident happen at this point in time and not earlier?

One theory behind this quandary in the case was that there was a large body of salt water nearby. With evaporation and changing wind direction, it is possible that the wind changed direction in some fashion, thus creating a new set of environmental conditions, so that the early work done in the danger zone resulted in no accident, but the final portion of work somehow enabled the electric power to arc over and electrocute the worker in the bucket.

Based on the investigation and analysis, we concluded that the power company should have obeyed the specification of the city code (8 ft, 10 in.) or ANSI/OSHA/NFPA (10 ft) when installing the utility line near the building. But what we found even more interesting was that the power company had an internal code which required 7.5 ft — even this code was violated in this accident considering the fact that the first power wire was just under 7 ft from the building.

The licensed owner of the sign hanging company could have contacted the power company beforehand and asked to de-energize the power line or cover up sections of the line with temporary insulated protectors. In addition, he should have warned his crew of the extreme danger associated with this particular installation, supplied a bucket and truck with proper insulation, or had insulation barriers provided to protect his workers.

During the investigation, we obtained questions and answers to the test passed by the licensed sign hanger in this case. The licensing board understood that there were multiple correct ways on how to handle the situations that caused this accident, but they only allowed for one of the correct answers to apply to obtain proper licensing in the city. The licensed sign hanger had given the only answer that the licensing board felt was correct in this matter — notify the power company to turn off the power near the building while the sign was being installed. Even though other options were given by the NEC and OSHA and others, the board of the city insisted on there being only one correct answer — turn off the power or NO license awarded.

It may be stated to a reasonable degree of engineering certainty that the hazards produced by the power company and the victim’s employer (licensed sign hanger) combined to cause the loss of life in this case. This is based upon the fact that the 13kV power line was placed too close to the wall on which the sign was being installed, and the victim’s employer did not take adequate precautions (as outlined in the exam) per his license. The second victim’s injuries can also be blamed on this combination or errors.

We concluded that the building’s owner and tenant could not be held responsible for this event because they had no electrical training or expertise. Therefore, they had no way of knowing that the power company had placed the 13kV line too close to this building. Similarly, they had no advance knowledge that there were safely options, as noted above, available to the sign hangers when they were erecting the new sign for this building.

Furthermore, several months before the accident, the utility had upgraded the power line that caused this accident from 4kV to 13kV. It had not notified the owner of the building for two reasons: (1) The original owner was selling the building to a new owner, and it was too difficult to obtain the new owner’s address. At the time of the upgrade, there were approximately four possible new owners for this building. (2) The power company had a protocol — if the new power line upgrade was near a place where humans would routinely be (for example, on a balcony or near an open window), then it would make it a priority to move the entire utility pole (or poles) to ensure it was a safe distance from the wall/window/balcony. It would also inform the old owner as well as all of the proposed new owners of the electrical upgrade. But because there was no expectation that a human would routinely occupy the space where the accident occurred, the priority level was lessened. Note: The utility’s protocol on this has since changed.

After our report was issued, the insurance company representing the owner of the building as well as its tenant were severed from the lawsuit. The case then settled out of court. Because our job was done, we were not given a clear answer as to how much money was paid out, but we were told (off the record) that 80% of the settlement was paid to the plaintiffs by the insurance company representing the licensed sign hanger; the other 20% came from the power company.