The Case Of the Floating Neutral

Bruce Crowly, P.E. | Electrical Construction and Maintenance | July 16, 2014
When the lights flicker for a split second, most people don’t read too much into it. It happens — just a fluke. But for one homeowner, who was experiencing ongoing problems for several weeks straight with lights brightening and dimming when he turned appliances on and off, there was obviously an underlying problem. In addition, the cable signal on the television was inconsistent, and the Internet service was dropping on a regular basis.

While trying to identify the source of the issue on his own, the homeowner noticed a section of coaxial cable on the outside of the house had a melted jacket. At this point, he called the local electric utility and cable company to file a request for service.

A technician from the cable company arrived the following day, at which time the homeowner showed him the melted jacket on the coaxial cable. After performing several tests, the technician’s supervisor told him to go ahead and cut the coaxial cable. Once he did, some lights in the house dimmed, others brightened, and a fire broke out in the second floor master bedroom. Discovering the fire, the son, accompanied by his mother and father, quickly vacated the house without injury. They called 911 immediately, and local firefighters were dispatched to extinguish the fire. The fire left behind damage to the second floor bedrooms as well as smoke and water damage throughout the house. Although the monetary amount of damage to the structure and its contents is unknown, the home was ultimately repaired after the incident.

The Case of the Live Neutral Conductor

The Case of Overheated Transformers and Neutral Conductors

I was retained as a forensic expert by the homeowner’s insurance company to ascertain the cause of the fire. Although the exact failure that caused the fire was not determined, the electric utility and cable company were named as defendants in the lawsuit due to evidence that indicated the actions of their employees contributed to the cause of the fire.

Fire investigators are typically retained by the homeowner’s insurance company to determine the origin and cause of a fire. If it is decided that electricity or failure of electrical devices/appliances are potential causes of the fire, then an electrical engineer is also retained. In this case, there were problems with the electrical system (i.e., lights dimming and brightening) and the cable system (i.e., television picture interference and Internet failure), so I was retained at the same time as the fire investigator.] 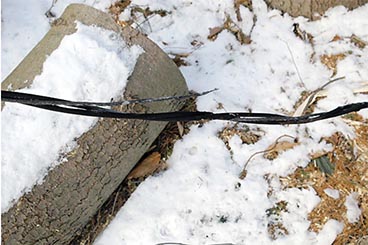 Although it was determined that the fire originated in the master bedroom at the head of the bed, the exact cause was not determined. The remains of a duplex receptacle, electric blanket, and radio in the area of origin were examined. However, extensive damage did not indicate a failure that could have caused the fire.

Examination indicated that the service drop cable to the residence had a severed neutral, as shown on Photo 1. The failure of the neutral conductor appeared to be caused by deterioration due to age and possible contact with tree limbs. Examination of the coaxial cable indicated melted insulation on a bend (Photo 2), indicative of heat caused by current flowing through the shield. 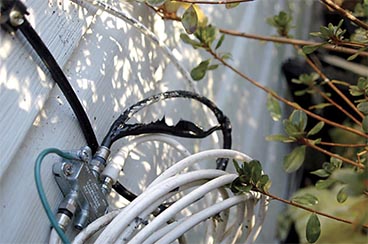 Documents produced during the lawsuit included depositions from the lineman and cable TV technician. The lineman testified that he was dispatched to the house for a flickering light problem. He was aware that such circumstances could be caused by a severed neutral conductor and — if he had seen any breaks in the wire — he would have de-energized the service cable until repairs were made. This action would have prevented the fire. However, he arrived after dark and — although he saw deterioration of the cable — he did not see any breaks in the neutral.

The cable technician testified that when he measured the voltage on the coax shield, he got readings of 20V to 35V, which was not normal. He called his supervisor to discuss the situation and was told to remove the ground connection. After removing this connection, the voltage measurement increased to 200V on the shield. Realizing this created an even bigger problem, he reconnected the ground and again called his supervisor. After another discussion, the technician was directed to cut the coax (although the reason for this action was not provided).

Theoretically, electrical current flows through all bonding and grounding connections to return to the electric utility transformer. The lower the resistance path, the more current will flow. The neutral conductor in the service drop cable provides the lowest resistive path to the transformer. When the neutral wire in the service drop cable was severed, electrical current sought other paths to return to the transformer. Those paths included the ground, through ground rods and a water pipe, and the cable shield that was bonded to the neutral on the electric utility pole where the transformer was located. Current flowing through the shield created heat that caused melting of the jacket. Losing the neutral also eliminated the 0V reference so that voltage on one line conductor increased while voltage on the other line conductor decreased. This resulted in the dimming and brightening of lights.

The case was settled prior to trial, the terms of which were confidential. However, several lessons can be learned from the sequence of events in this case.

The lineman was aware of the dimming light problem and that it could indicate a problem with the neutral, but he did not investigate further since the service drop cable was owned by the homeowner. Although he saw deterioration of the cable, he testified that if he had visually identified a severed neutral conductor he would have de-energized the transformer until cable repairs were made, which would have prevented the fire.

The cable technician testified he was aware that lights dimming and a melted jacket on the coax were indications of electrical problems. Furthermore, measurements indicating voltage on the cable shield also indicated an electrical problem. Therefore, he should have told the homeowner to call an electrician. If he had done so without cutting the coaxial cable, the fire would not have occurred. It was also noted that the cable technician violated OSHA requirements by cutting the coax (i.e. working on energized equipment without wearing personal protective equipment).

SIDEBAR: Importance of the Neutral Conductor

The neutral provides a 0V reference. When the neutral is severed, this reference is lost, and voltages can exceed 120V — depending upon the loads connected to each branch circuit. As in this case, this situation can cause some lights in the house to be brighter and some to be dimmer. Changes in higher loads, such as refrigerators or air conditioners turning on and off, can also cause lights to brighten and dim. In addition, higher voltages on the branch circuits can damage appliances.